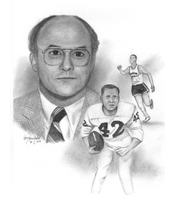 Dick Desmarais was the rarest of the rare athletes: a four-sport standout in high school who went on to play two sports in college and then continue a professional career.

He is regarded by many as one of the finest athletes ever to come out of Sanford, a blue-collar town that celebrates athletic excellence.

According to long-time friend Forrest Haselton, Desmarais' "sports legacy is unique for its diversity and singular achievement at each competitive level."

After starring in high school in Sanford, Desmarais went on to become an All-New England running back at Boston University and a starting running back for the Ottawa Rough Riders of the Canadian Football League.

He began his competitive career at St. Ignatius High in Sanford where he played football, basketball, and baseball for two years. He then went to Sanford High School for his junior and senior seasons where he not only continued to play those three sports, but added track as well. He was regarded as an outstanding running back, equally adept at applying a punishing block as he was at avoiding tackles.

In all, Desmarais earned 14 varsity letters in high school.

The scholarship offers came from everywhere - Syracuse, Penn State, Michigan State and Boston College - before he decided on Boston University.

He had a strong career at Boston University, finishing with a third team All-East selection his senior season. He was also a track standout for the Terriers.

From Boston University, he headed North. He joined the Rough Riders a year after they won the Grey Cup and quickly replaced popular running back Joe Kelly for the start of the 1961 season.

"When he was introduced in the first game of the season, he was soundly booed by the Ottawa fans," wrote John Cochin, a teammate of Desmarais at Sanford and a sportswriter for the Sanford News. "But the boos soon turned to cheers after a few short weeks when his caliber of play showed the fans he was worthy of the coach's decision."

He played two seasons in Canada as one of just 16 Americans in the league.

His athletic career prepared Desmarais well for private life. He became a top national salesman for the Nokia Corporation.

The Maine Sports Hall of Fame was established in 1972 for the purpose of: 1) appointing and bestowing recognition awards and scholarships to outstanding Maine high school scholar-athletes; and, 2) to formally honor and memorialize Maine athletes and sports figures who have brought distinction and honor to the state of Maine.